Insect stings can be painful and dangerous to the safety of your home. Don’t put yourself or your family at risk by trying to remove a wasp nest—or any other kind of stinging insect nest—yourself. Instead, let our highly trained wasp exterminators safely remove them from your property for you.

Stinging insects like bees, wasps, hornets, yellow jackets, mud daubers, and others are common in Maryland and Virginia. If you attempt to kill one of these stinging insects, you may put yourself at risk of getting stung and triggering an allergic or worse. We do not recommend attempting to remove them or their habitats without the help of a trained stinging insect control expert.

Types of Wasps in Maryland

Being able to identify the type of wasp is integral for your stinging insect control expert to safely remove the stinging insect from your yard or home. There are three common wasp species in Maryland and Northern Virginia: paper wasps, hornets, and yellow jackets. If you’re unsure of which type of wasp or wasp nest you have, call the professional wasp control experts at B.O.G. Pest Control at 703-666-3801. Paper wasps are long and slender, with long, thin legs. Their coloring can range from ​yellow to black, reddish-brown, or dark brown.
Their nests are distinct and usually attached to an eave, under a window sill, or under a deck, the nest will be roughly circular in shape and can be quite large. The nests can be found in other places, such as inside a piece of equipment or inside hedges.

The queen will begin the nest in the spring, and, as the workers are produced, the nest will be made larger. These wasps like to eat caterpillars and other insects, so they actually act as an important biological control for other pests—however, that doesn’t mean you want them around your backyard! For the homeowner, a paper wasp nest can be dangerous. Paper wasps are very defensive and will sting to protect the nest if they are disturbed. Yellowjackets are about an inch in length and are easily recognized by their black and yellow stripes and about an inch in length. They are the insect that is the most likely to sting you. Most yellow jackets are ground nesters, and some build nests in trees or buildings.” If disturbed they will aggressively defend it and may result in a family member, or pet being stung several times.

A ground nest of yellow jackets will have one entry point and can be home to thousands, which makes them a threat to your family and pets, especially when this type of wasp is very common outdoors in the Spring and Summer. They can be found around food and beverages, looking for sugar and other crumbs.

The in-ground nests can be easily disturbed by ground vibration (for example a lawnmower). Once the yellow jacket is disturbed, you must get away as soon and as fast as you can. There is only one true type of hornet in Maryland: the European hornet. These hornets are large, yellow or chestnut-colored, and commonly found near garbage areas, as they eat files and other insects the trash attracts.

Hornet nests are distinguishable by the large paper-covered nests . Usually, there are several hundred hornets in the nests, and these hornets tend to be docile but will sting if disturbed. If you find a nest around the house, you usually have the common bald-faced hornet. The nest is never re-used and only the new queens survive to the next season. The mud dauber is a dark wasp that is long with a very thin waist and generally is yellow and black. The nests look like long cylindrical tubes composed of compacted mud. They seldom will sting and will build hundreds of tubular nests. Their nests are harmless and will do no damage to structures.

Types of Bees in Maryland

There are three species of bees common in Maryland and Northern Virginia: carpenter bees, honey bees, and bumblebees. While BOG Pest Control has a treatment program for carpenter bees, we do not treat honey bees or bumblebees, as they are important pollinators. 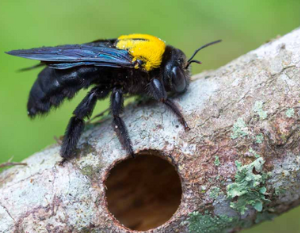 Carpenter bees look similar to bumblebees with the primary difference being a lack of dense hair on the tail end. Solitary females will bore holes in unprotected wood where they create a chamber where they will deposit several eggs. Males will guard the entrance of the nest but cannot sting. The female carpenter bee will not defend the nest but will sting if handled. Honey bees are social and are familiar to all of us. They are brown, small, and fuzzy and they collect pollen and nectar from flowers to feed other colony members. Honey bees will sting, but only if stepped on or in defense of the nest. While wasps and hornets can sting multiple times, honey bees can only sting once, after which they die. Bumblebees are large, hairy, and are black and yellow. They nest in cavities in rock piles, empty mouse burrows, or under layers of dense vegetation and will not sting unless a nest is stepped on. While bumblebees may look aggressive, they are only interested in collecting nectar and pollen from flowers.

What To Do If You Get Stung

If stung, remove the stinger as quickly as possible to stop any additional venom from being pumped into the wound. A local reaction to being stung is normal—if you are stung on the hand, there may be some localized swelling. As long as there is no additional reaction the redness and swelling will persist for about a week. If a severe reaction is experienced, you will need to see a physician as soon as possible.

Clients Love Us - No, Seriously… they do! But don’t take our word for it.

Highly recommend BOG for mosquito control. I honestly did not believe it would make a difference living in the woods as we do. Unbelievably, we have our yard back and can enjoy being outdoors. I have been a customer of BOG for lawn care for several years. Very satisfied with this company and their customer service. Our tech today, Jasmine Fritch Wooge was very thorough. Thanks- Sally Deleonibus

A thing of nightmares: finding spiders the size of your hand under your pillow at night. Camel crickets in your laundry room. Hornets coming through the chimney. I begged my fiancé for a solution, so we hired BOG! They came and sprayed - I haven’t seen a single bug inside since they came. I don’t have to look for spiders in my bed before sleeping anymore. Resting easy and peacefully! Thank you soooo much!- Laura Forrester

We had a situation where carpenter ants literally ate our basement door, I spoke with Jasmine and she had a technician here the next day. We also had a termite problem in my husband's shed, again Jasmine came to our rescue and set things up for treatment. We are very happy with BOG and glad we can count on them to meet our needs!- Dollie Chroniger We know that when you find pests in your home, you want to get rid of them—and fast. That's why we offer quick extermination services. But instead of just addressing the infestation, we take a proactive approach! Using Integrated Pest Management techniques we work with you to find the best solutions and prevent critters from getting into your home again.

Get a Quote Now
Pest Protection Plus

Experience complete protection from common household pests like ants, spiders, wasps AND termites in your home.

Get protection from pests & termites in your home, as well as mosquitoes, fleas & ticks in your yard!

Get a Quote Now

Earwigs are common household pests surrounded by urban legends and misunderstandings, though few if any of which are rooted in reality. So let’s take a few minutes to get to know them!

Termites can cause tens of thousands of dollars of damage to your MD or VA home if an infestation isn’t controlled properly. Identify termites and prevent damage

Ants, flies and mosquitoes tend to be more of a warm weather issue in Maryland. Follow these simple tricks and tips prevent them

7 most common pests during the fall months in Maryland and Northern VA. It’s a myth that pests go away in the fall season just because it’s cooler outside. Protect your home with these tips

Am I Getting More than I Ordered: Bugs and Shipping Boxes
Ants vs. Termites: What’s the Difference? | BoG Pest Control

5 most FAQ questions about salamanders. Plus, 3 tips to get rid of salamanders in your MD or Northern VA home

Are There Venomous Spiders in Maryland & Virginia? | BoG Pest

3 dangerous spiders found in MD & VA, and where they like to hide. Plus, tips on how to prevent and get rid of them

Can My Dog Get Lyme Disease? | BoG Pest Control

Yes, your precious pup can get Lyme disease from ticks. Our animal-loving pest experts have 5 tips to share to help protect your furry friend.

House crickets are omnivorous scavengers that feed on almost anything, and can destroy both vegetable gardens and clothing. Prevent and protect your home from crickets

Boxelder bugs are harmless but no MD or Northern VA homeowners want them as a guest! Learn how to get rid of boxelder bugs and prevent them from coming back

A colony can consist of more than 300,000 ants nesting in trees, underground, or even in your home. Get your customized solution for eliminating these opportunistic feeders.

Termites cause $5 billion worth of home repairs each year in the US. Get your house inspected for Termites, or protect your property from these destroyers with our Advanced Protection.

Moles and voles can undermine the structural integrity of your yard and severely damage your grass, trees, and shrubs. Help keep moles and voles away with a program built for you.

Keeping mice and rats out of your home doesn't have to be difficult. Here at B.O.G. Pest Control, our rodent exterminators can help you get rid of your infestation safely and effectively using proven rodent control methods.

Feed your guests – not the mosquitoes! Take advantage of comprehensive mosquito coverage, or protect your guests with special event sprays perfect for graduation or weddings.

Insect stings can be painful and dangerous. Don’t put yourself or your family at risk by trying to remove a nest. Instead, get help from the professionals.

Ticks threaten the health of your family and pets, and fleas can have a big impact on your comfort despite their size. Bite back with Flea and Tick protection.

First impressions matter, especially when it comes to your business. Create a safe and welcoming place for your clients and customers by protecting it from unwanted pests.